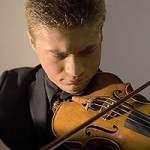 Tymur Melnyk is teaching violin and chamber music at the Prayner Conservatory of Music and dramatic Arts in Vienna and as assistant of Prof. Pavel Vernikov in Scuola di Musica di Fiesole in Italy. He regularly gives international master-classes, at the Russian Culture Institute in Vienna, Austria, at the “JVL Music in Summer” Festival, Accademia d’Archi “Arrigoni” in San Vito al Tagliamento and Associazione Culturale Alirio Diaz in Gualdo Tadino (Italy), for the Shenzhen Art School in Shenzen (China), at the “Kosta Manojlovic” music high-school in Belgrade/Zemun (Serbia), at the “UPOL international Music Festival” (Slovenia), at the “International Forum for Music Performance and Pedagogics” in Kiev (Ukraine).

Tymur Melnyk was born in 1985 in Kiev, Ukraine. 1991-1999 started studying violin under Prof. Hanna Melnyk at the age of six in the “School for Musically Talented Children” and continued in “Kosta Manojlovic” music high-school in Belgrade/Zemun, Serbia.
2000-2009 he studied for the concert diploma under Prof. Michael Frischenschlager at the University of Music and performing Arts, Vienna, where he graduated cum laude with a master’s degree and was awarded the honorary prize of the Austrian Minister of Education as one of the best students (degree thesis: “Methods of the Russian Violin School”). During his studies he was frequently elected teaching assistant by Prof. Frischenschlager.
2007-2013 complementary private violin studies with Prof. Eugenia Tchougaeva (former assistant of Prof. Y. Yankelevich) in Vienna, Austria and in Moscow, Russia.

In 2008 Tymur Melnyk was awarded the Austrian citizenship due to his artistic achievements.