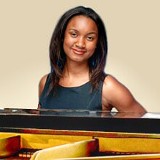 Award-winning inspirational pianist Ronée Boyce possesses a dedication to performance and education that is steadfast and unquestioned. She is quickly establishing herself as an artist of intense musical sensibility and has been enthusiastically praised for her great depth of musical interpretation. In addition to performing more traditional solo piano and chamber music, she has demonstrated a keen interest in Russian works along with more innovative and lesser – known music repertoire, often introducing such works to her listening audiences in concert.

Recent solo engagements have included recitals and concert appearances across Western Canada, New York City, London, France, and the Caribbean, with special chamber music appearances at the Toronto Centre for Performing Arts, Théâtre de Bourg, Maison de l’Europe, Maison du Canada, with L’Heure Musicale in France, and an invitation to perform for the Ambassador of Chile.